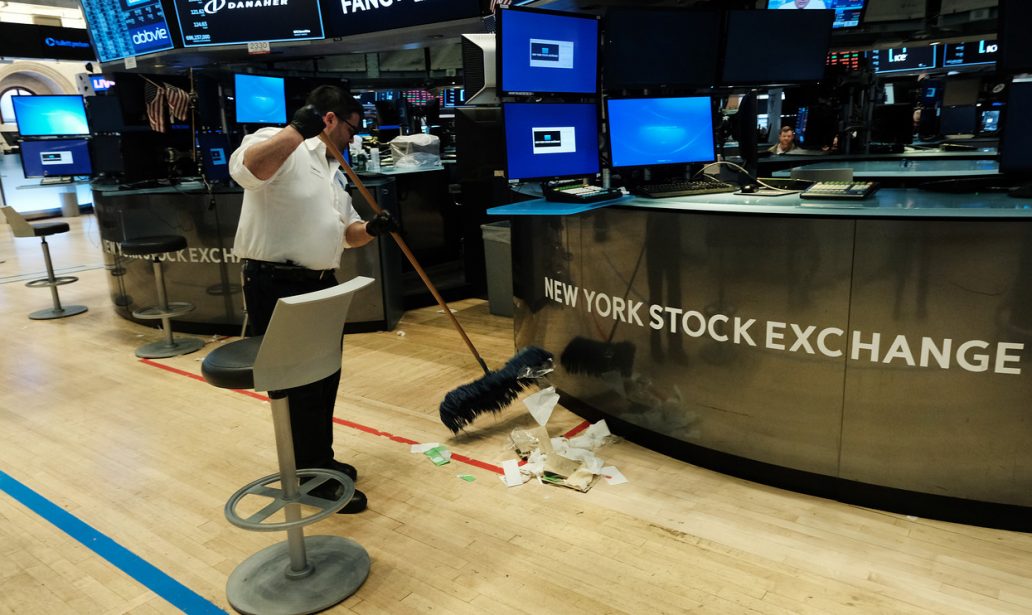 Our long term S&P 500 model states that the U.S. stock market is not in a bear market. We define “bear markets” as declines that exceed 33.33% and last more than 1 year.

Neither a big correction nor a long consolidation has been completed as of October 9, 2015. Hence, we are waiting for a significant correction to be completed before we buy stocks.

Shorts are getting squeezed

The S&P has been rallying furiously since October began. It rallied 140 points in 8 days. There is only one explanation for this level of strength in the market: bearish traders are getting short squeezed.

Short interest has been very high since the August 24 crash. Many traders believe that the S&P will retest its August 24 lows. (We believe that too, but our belief means nothing. We follow our models 100%.) With such a large amount of short positions, it’s very easy for bullish investors to create a massive short squeeze like the one we’ve seen over the past 2 weeks.

The following chart from Sentimentrader illustrates NYSE short interest. As you can see, short interest is very high historically speaking. It is now higher than it was during the big corrections of 2011 and 2010.

The good traders that we talk to are all waiting for the S&P to reach the 2060-2040 range before they start selling. Perhaps their short term outlook is correct. 2060 is where the 200 sma lies, and 2040 is previous support that has now become resistance.

One of two scenarios are playing out right now.

We don’t know which of these 2 scenarios will play out. But regardless of which scenario plays out, the S&P should temporarily reverse down from its 200 sma.

This means that if we’re going to buy stocks, we should at least wait until the S&P retraces to this level.

The following chart illustrates what happened in 2011. The S&P crashed in August, made a new low in October, rallied to the 200 sma, and then retraced 61.8%.

The following chart illustrates what happened in the long consolidation of 1994. The S&P bottomed in March 1994, bounced to its 200 sma, retraced 61.8%, and did not make a new low.

So it doesn’t matter if the S&P will make a new low or not. Either way, it should back down from its 200 sma.

Some traders think that the S&P will fall to 1650 if it breaks 1800. They’re using the classic head-and-shoulders pattern. They argue that a break of the “neckline” will precipitate a crash to 1650. We do not use chart patterns at Investing Track.

These Charts are not Valid Bear Market Arguments

Bear market arguments are still flying off the shelves despite the recent rally in stocks.

Our model has predicted each of the 6 bear markets since 1920. Bear markets usually began around 3-6 months after our model emitted a sell signal. Our worst bear market call was in 1999 when we called a bear market early by 9 months (the bear market began in 2000). Thus, we have a very high level of confidence in our long term S&P 500 model.

Despite our high level of confidence, our model may be wrong this time. We believe that this bull market still has 3-5 years left to it, but perhaps the bear market began without our model emitting a sell signal. The odds of our model making this mistake are slim, but perhaps our model is missing something.

Regardless, we’re sticking to our guns. But even if a bear market has begun, we’d like to know the reasons. And the following bear market arguments are just wrong.

There’s a popular chart that’s making its way around trading desks. In essence it looks like this, courtesy of NorthmanTrader.

The chart illustrates the S&P 500’s 5 monthly ema crossing below its 20 monthly sma. This chart essentially means that the current bull market is running out of steam.

It’s true that bear markets began the last 2 times this situation occurred. This is what what bearish investors are basing their doomsday scenario on. “A bear market has began because the bull market is running out of steam”. Here’s why this belief is misguided.

It is perfectly normal for a bull market to “run out of steam”, consolidate or correct, and then rally furiously. Going back in history shows us that the 5 monthly ema crossing below the 20 monthly ema can be bullish!

The following chart illustrates how the 5 monthly ema crossed below the 20 monthly ema in 1994. After a massive 1 year consolidation, the S&P’s bull market roared back to life and expanded by multiples in the ensuing years. Bearish investors were skinned alive.

Charts such as these are particularly popular among trader circles. Traders have a problem because they think that bear markets begin merely because of a technical pattern. In their lingo, “only price matters”. “A bear market has begun because the price is falling”.

There’s another chart similar to the first one that’s going around trading desks. In essence, it looks like this, courtesy of Mella.

Like the first chart, the S&P facing resistance at the 20 monthly moving average doesn’t mean anything. Yes, it’s true that bear markets began the last 2 times this happened. However, bear markets did not ensue when this happened in the 1960s, 1980s and 1990s. The S&P 500 often faces resistance at the 20 monthly moving average during big corrections.

A “Death Cross” Is Not Bearish

The S&P 500 made a “death cross” (50 sma crosses under the 200 sma) more than a month ago. It’s interesting how many traders yell “bear market!” merely because 2 lines have crossed.

Brett Arends from MarketWatch conducted a study that goes back to 1900. The study shows what happens to the S&P 500 when a death cross occurs.

Bear markets calls because of a “death cross” are often plain wrong. A death cross occur in December 1914. Then the Dow Jones promptly soared 80%.

This technical indicator, like most others, is just hocus-pocus, based on the selective use of data and some bad logic.

The U.S. Stock Market is Not Forever Range-Bound

The current correction began when various U.S. stock market indices were at old highs. These charts are from CNBC.

Some investors are concerned that the current correction began when the stock market was at old highs. Cornerstone Macro’s Carter Worth states

Although we disagree with Worth’s conclusion, he does make a valid point: “That’s not random.” History shows us that many big correction began when the U.S. stock market was at old all time highs. That’s perfectly normal.

However, bear markets do not begin just because the stock market is at old all time highs (whether the market’s been adjusted for inflation or not). If bear markets begin just because the market is approaching it’s old high, the U.S. stock market would never ever go up in the long term. It would forever be bound within a range. History shows us that the U.S. stock market does go up over a 50 year time frame, even when adjusted for inflation.